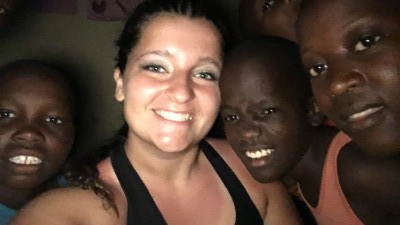 One of our recent trip members, 16 year old Madeline Book, wrote this for her dual credit English class. We hope her words take you on a journey to Uganda and challenge your heart. They have ours.

The clouds had rolled in once again as the fluorescent sun began to set, and water droplets began to land on the scorched, red dirt of the African Savannah. My feet were the same color as the dirt, no matter how long I tried to scrub them clean, the dull residue remained on my feet. The children of the town, Mbale, didn’t care about the annoying dirt that clung to their feet, whereas the children greeted us off the bus barefoot. No child stuck out to me as I climbed down the steep steps of the bus, but as I would come to realize after I arrived home, there was a little girl who I will remember for the rest of my life. Her name is Shanat.

The orphaned children led the group and I down the long path that would lead us to the church. Hand in hand, we walked in the drizzling rain. The building was not only a church, but the children’s school house. The walls were made of the same thing that everything is built with in Africa, red dirt. The roof of course was tin, making the soft mist of the rain sound like an incredible storm. No lights were present in the dimly lit room and the soft breeze slowly came through the open windows. Everyone was still playing outside when we arrived, clothes soaked, still wearing their bright smiles that they had on every day. The billowing clouds didn’t affect the mood. Spirits were incredibly high. People from all over the widespread village had come to worship in the compact school room.

As I sat down, I waited for the church service to begin. A large number of people sat at the children’s stools that had been used earlier in the day for their studies. My sponsor child had fallen asleep on my lap, her clothes damp from the on again off again rain.Four other children sat to my left and right. The older kids holding the younger ones. As the service began I stood to worship the Lord. At first, the pastor was not able to get the generator going, so the singers began their chorus acapella. The song they sang was beautiful. Everyone around me was dancing,hands raised in worship. The elders of the church were screaming chants that were so lovely. The small child still clung to my chest. Falling in and out of sleep.

That’s when I noticed some of the littler children dancing at the front. One of them came to find a seat in a lawn chair next to a smaller girl. I couldn’t help but look over and realize that the two girls were looking at me with a stare of admiration.

10 minutes later the pastor dismissed everyone to separate into their study groups which was men, women and children. I stayed with the children, as more began to surround me I really couldn’t have left even if I wanted to. The children hung onto my arms as if I would just get up and leave without saying a farewell. The room had grown dark, as the once radiant sun had already set. I noticed one girl who had been sitting to my right had gotten up and it took a fraction of second for another girl to fill her spot. She looked as all the other children did. Her hair was buzzed short as if the follicles wanted to hide from the blazing afternoon sun. She had dark skin and brown eyes with a gorgeous smile that contrasted in color to her skin. She only wore a bright pink tank top and blue shorts that were too big for her small frame. She was very quiet, her shyness showed through her body language.

“Dancing is a gift from God.” Her soft voice caught me by surprise. As I turned to look at her, I realized that she had been staring at me.

As she repeated herself, I was still caught off guard by her words. It amazed me that these children live in such poverty, yet they still dance. They may not have a next meal, but they dance.

“Yes it is,” I finally replied, “although I am not a very good dancer!”

She replied with a nervous laugh. We didn’t talk to each other for the next few minutes.

“What is your name?” I interrupted through the silence.

One of our group leaders had brought a cartoon for the children to watch, so most of the children were distracted. The room was filled with laughs and awe whereas the children had never watched TV before.

Under her breath Shanat had said something to me that had not been audible.

“Both of my parents have died,” she repeated.

I didn’t know what to do. I was completely and utterly flabbergasted. This phrase was definitely something I had not expected from anyone let alone this little girl. I sat there in shock. I couldn’t formulate the words to find a response for such an awful circumstance.

“I’ll pray for you,” was all I could manage to contrive at the moment.

Shanat nodded at me in thanks. Her once beautiful smile had changed to a depressing frown. This little girl had lost her everything. I couldn’t even comprehend what she had been through.

“My step mom hates me. She has abused me,” she added.

My stomach turned. All I wanted at that moment was the ability to protect this girl. All I wanted to do was take her home with me and give her a sense of love and safety. She had lost all form of safety and love. She has been through more at 11 than I ever will in my life. All I could do was reassure her that she is loved by somebody more than anything.

“Shanat, do you know that God loves you so much? He will protect you through this. I’m praying for you Shanat.”

Maybe she already knew that God loves her, but I thought it was my duty to remind her.

What more could I have done?

“We’re loading up team,” I heard from our group’s leader.

I felt an ache in my heart. I felt as if I needed to be there for Shanat. The last thing I wanted to do was leave this troubled, yet innocent girl. I could do nothing more. I sluggishly began to board the noisy bus. This whole time, Shanat had a grip on my arm.

“You have to come back tomorrow,” she pleaded.

“I can’t. I leave tomorrow for Kenya.” For some reason, journeying to Kenya did not interest me any longer. “I’ll be praying for you Shanat.”

She responded with no words, just a slight grin and a hug.

Two weeks later, back in America, I was volunteering for my home church in the three year old class. The room was brightly lit. Toys were scattered all around the room, the walls painted a pleasant shade of yellow. A sink and a bathroom located in their own room extended from the play area for the children to freely use. A snack jar for the children when they became hungry. The air conditioning brought goosebumps to my arms.

As the children filed into the classroom, they cried for their parents,

DADDY, DON’T LEAVE!” They didn’t realize that their parents would be back in a little over an hour.

One child, who was especially fussy, became my priority to keep her from crying for her parents. Her dress was lovely, colored in bright flowers. I began to reassure her that her parents wouldn’t forget about her and she finally released her tear stained hand from her face. Her long blond hair tussled after she tried to use the strands as a shield for her face. She wouldn’t allow me to set her down the whole time she was in the classroom.

At one point she looked at me and said, “I have a mommy and a daddy.”

I was taken back to that small, dirty classroom. Tears came to my eyes. I came to a realization in that moment that Shanat would never be able to say those words. I became distracted in that instant. Most of the people that I came to know in Africa were parentless, yet they were so amazingly hopeful. They had the love of the Lord radiating in their hearts. They are blessed in ways I will never be able to comprehend. Shanat will always have a special place in my heart, and I still think about her everyday.

Shanat is one of the children at Ebenezer that doesn’t yet have a sponsor to build relationship with. If you are interested in more info about that, contact us!